Helen Rochester has a dream: unveiling her airship at the Paris Exposition of 1867. It’s sure to make a splash. But her interfering father wants to chaperone the journey — and she has doubts about the Italian alchemist. He has promised a revolutionary new fuel but why does he need the winged Venetian lion?

“Heartily recommended to anyone who has a sense of humour!”
“Witty and clever!”

“You will want to savor every word, every page and read this book over and over. The warmth and peacefulness these stories bring to the reader feels like a big, comfortable blanket on a cold wintry day” — The Pagan & the Pen

“K. A. Laity’s efforts make Finnish mythology and folklore relevant today in ways that resonate with the modern reader. She mates myth and womanhood exquisitely. In short, her work is fabulous.” — FinNALA 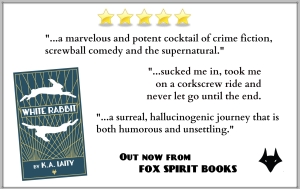 Disgraced former police detective James Draygo has sunk as low as his habit allows, working as a fake psychic despite his very real talents. When a media mogul’s trashy trophy wife gets gunned down at his tapping table he has to decide whether he can straighten up long enough to save his own skin. He may not have a choice with Essex’s loudest ghost bawling in his ear about cults, conspiracies and cut-rate drugs. Oblivion sounds better all the time…

On the gritty backstreets of a crumbling city, tough dames and dangerous men trade barbs, witticisms and a few gunshots. But there’s a new twist where urban decay meets the eldritch borders of another world: WEIRD NOIR. Featuring thugs who sprout claws and fangs, gangsters with tentacles and the occasional succubus siren. The ambience is pure noir but the characters aren’t just your average molls and mugs—the vamps might just be vamps. It’s Patricia Highsmith meets Shirley Jackson or Dashiell Hammett filtered through H. P. Lovecraft. Mad, bad and truly dangerous to know, but irresistible all the same.

“Kate Laity’s Unquiet Dreams  is the long, deep plunge in the coldest quarry in the woods; the lingering look under the rotting wood at all the writhing life there; the stare into the abyss until one realizes something is staring back.” — S. R. Bissette

Shamans v. Aliens! It’s an alternative history/science fiction/urban fantasy/shamanistic retelling of the Descent of Inanna/great American road trip that takes in Albany, the Berkshires, Kripalu and Boston. I pull off the impossible task of making Worcester glamorous and exciting. There’s a dead cat whose ashes need to be taken to Mount Auburn Cemetery, aliens and a 300 year old magpie. I started writing this novel when Kurt Vonnegut died and I was thinking how dispiriting it was to realise there would be no new sad but funny novels from him. I hope it’s got a little of his spirit.

“Chastity Flame is one thrill ride after another. [Laity] amazes me with her wonderful writing talent.”
– Coffee Time Romance (5 “cups”)

Pelzmantel and other Tales of Medieval Magic. Novel plus three bonus short stories and an essay on medieval magic. Immanion Press (June 2010). Available as an ebook, too.

“Laity’s storytelling is magic in itself. The language is beautiful and weaves vivid pictures for the reader’s imagination.” — Matrifocus Magazine

Watch the trailer! Read an excerpt!

Two English girls, pirates, kidnappers, orphans, disguises, a ghost, interesting facts about insects, cheese, the King of Naples and at least one improving book: this ain’t your mama’s Gothic!

This is a genuinely entertaining, superbly crafted, somewhat silly and utterly wonderful book. An antidote to too serious romances with ludicrous plots, knowingly tongue in cheek and yet still offering characters you can’t help but like and empathise with and adventures that have you almost skipping ahead to check everyone makes it out ok. It also makes a very serious point about pockets.

Heartily recommended to anyone who has a sense of humour, even if comedy, gothic and romance are three genres they firmly shun under normal circumstances. ~ Un:Bound

Read an excerpt! Watch the trailer!

“You will want to savor every word, every page and read this book over and over. The warmth and peacefulness these stories bring to the reader feels like a big, comfortable blanket on a cold wintry day” — The Pagan & the Pen

“K. A. Laity’s efforts make Finnish mythology and folklore relevant today in ways that resonate with the modern reader. She mates myth and womanhood exquisitely. In short, her work is fabulous.” — FinNALA

Watch the trailer! Read the short story “Palakainen”! Buy it for your Kindle!

“Algernon Blackwood and Dennis Wheatley, make room: Kate and Elena are here, and their heroine Jane Quiet is taking no prisoners in the occult wars.” — Steve Bissette

“Jane Quiet is my kind of woman: smart, sexy (it’s the smart that makes her sexy), fearless when fighting monsters…and, well, she doesn’t say a lot but she knows how to kick monster ass!” — Philip Nutman

When Little Joe the Krampus Met. Chapbook with The Joey Zone (Dec 2003).