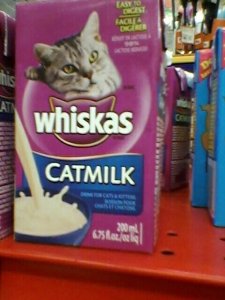 No, cat milk has nothing to do with my time at Readercon. I stopped in the pet store to get some flea spray (sigh) and a new tag for Kipper. When I saw this, I kept picturing a very low stool 😉 and couldn’t stop giggling.

Readercon was a busy time: right away Thursday night. I was an “extra discussant” for Barry Longyear’s “Imagine or Die” panel. Unfortunately, I didn’t get much of a chance to add anything, so it was a bit frustrating. That night I stayed with pal Michael Draine (thanks!) and we had time to chat that night and over breakfast at Bickford’s.

Friday I ran into Liz Hand right away at “The Fiction of A. Merritt” panel, which did its best to resurrect the career of this now sadly neglected writer. I made sure to tell Liz I had a copy of my book for her (since she was so nice to write me that lovely intro to Pelzmantel), but I couldn’t give it to her until after my reading.

Next I had to run off for the reading of A Midsummer Night’s Dream; in the first hour, I played Peter Quince. It was quite delightful and fun, not least for Faye‘s fabulous fairy singing. I ran out for the next hour to catch the “New England: At Home to the Unheimlich?” discussion which ranged far beyond New England to explore Southern Gothic and even European influences. Then it was back to the Bard. I was pleased to play Puck; not so many lines in the last act, but I did get to end the play. The play within the play certainly led to a lot of laughter. Much fun.

Cecilia Tan led a great discussion on how ebooks and ebook readers are changing the shape of publishing but also the habits of readers. It was one of those panels that could have easily gone on much longer. Much fun to hear Liz read from her forthcoming Available Dark, the sequel or continuation of Generation Loss. This narrative heads off to Finland and Iceland, so you know I’m eager to read it!  The last event of the day was the “Meet the Pros(e) Party” where writers give out stickers with a line of their prose on it. Fun idea.

Saturday morning kicked off with the Broad Universe Group Reading. I had known a few Broads before, but after seeing the fun of the reading and chatting with Morven and Inanna, I decided I really needed to join. The difficulties of promotion are hard and it’s no fun on your own. worrying whether anyone will come to your reading that afternoon at Readercon

as some might do. If you’re Liz Hand, you don’t have to worry about those things. Her talk on “Crypto-Aviation” was standing room only. Many people looked in and decided not to join the throng. They missed out! It was great fun not only seeing the bizarre models, but also hearing about her adventures working for the Smithsonian.

The Fan Fiction panel was a lot of fun. I really can’t understand writers who get upset at fanfic — it seems like a wonderful compliment and likely to increase a book, series or film’s reputation. Yes, it can act as a criticism, but no one’s immune from that. A few of the writers, like Victoria Janssen, have gone on to write professionally. It can be a good training ground! After that, I had my reading in the afternoon: I played my kantele and read from the zombie western. Small audience, but at least I had one!

The Nalo Hopkinson interview was wonderful: interesting, entertaining and ultimately, very moving — hard to hear again the tragedy of Octavia Butler’s unexpected death, worse to hear that Hopkinson herself has been homeless and living hand to mouth for the last two years. Illness without insurance: the shame of this nation is that it does not offer simple health care to all.

Saturday night is the traditional Bad Prose Competition. Silliness and fun, and a whole lot of bad writing (on purpose). Hands down, the Readercon book I’m most looking forward to is by second place finisher in the contest, Mary Robinette Kowal. The most amazing thing — in part — is that this paranormal Regency is coming out from Tor:

Sunday was the town meeting for the Interstitial Arts Foundation, the Shirley Jackson Awards and then my final panel on Sex and Gender in F&SF. Despite being the last session of the day, we had a lively discussion and much (cordial!) disagreement and questions from the audience. I will propose a continuation for next year!

Thursday I’m off to Necon. Crazy.