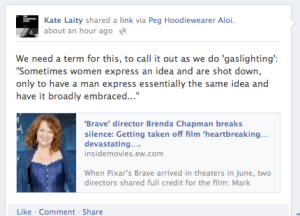 Here’s a thing: from one of those ongoing discussions, most recently on Facebook, but other places too. There’s a phenomenon that crops up all the time, yet has eluded naming so far. As I mentioned when sharing Peg’s post (right) about director Brenda Chapman on Facebook, the usefulness of the term “gaslighting” has been amply demonstrated in the recent bout of video game misogyny. So it would be terrific to find a word for this:

It’s an experience many women have had repeatedly. I know in my professional life especially it’s been the cause of much teeth gnashing. Less assertive men know the experience, as well.  As Young Louisa noted, too, “It happens with jokes too. You give a witty response; nobody hears it. Two minutes later a man/more glamorous person cracks the same response, gets a big laugh from all present. Should we just talk louder?”

I don’t know if talking louder helps, because of course then we’re dismissed as “shrill” you know, or some other variety of ‘straw feminist’ clichés. The idea that someone like Chapman can be removed from her position while millions continue to be sunk into the completely negligible talent of M. Night Shyamalan boggles the mind.

How’s that Year of the Woman going?

So there’s got to be a word for it — but what? Maura McHugh suggested with a wink, “Manpproval? Manappropriation?” While I like an analogue to mansplaining, I had a thought we needed something more metaphorical that gets at the unfairness we instantly feel at having our thunder stolen as well as instantly recognisable. I’m trying to think of a film that captures this in an instantly recognisable way like Gaslight, but I can’t think of one that has a single word that will work.

I had in the back of my mind the parable of the Prodigal Son (you didn’t expect that, did you? guess what, medievalists have to know a thing or two about the bible). The Boarshead Theatre in my home town did a fantastic version of Godspell years ago, that was a hoot. They reimagined the Prodigal Son parable as an episode of Leave it To Beaver. The lesson is supposed to be about the infinite grace of the lord, but for most people there’s a sense of “Hey! He didn’t deserve to get the fattened calf!” Yet it doesn’t lend itself to catch phrasing: Hey, don’t you take my fattened calf! Hmmm.

More thought needed: what would make a good term for this?

If you need a unicorn chaser, here’s my poem for Miss Sophie’s favourite toy, the flying seal.