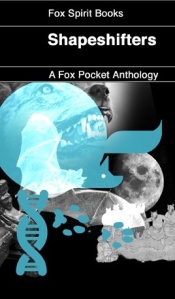 ‘Forget everything you think you know about the big bad wolf. It’s not that simple any more. Here are werewolves, skin walkers, demons and unknown dangers. Nothing can be relied upon, not species, not shape, not gender. In the second Fox Pocket collection of short and flash fiction we explore what happens when nothing is as it seems.’

Here’s a little taste of my ‘unusual’ shifter:

Carlos awoke with a groan. He wiped the muck from his mouth and shuddered. It had happened again. No, no, no, ayúdame, virgen! But he knew there was no way she could help him. His prayers unanswered, he rolled out of bed, feeling the aches in his bones. The change always hit him like a truck.

He stumbled to the bathroom to swallow a few aspirin. Carlos avoided catching his reflection in the mirror. He knew too well the blood-shot eyes that awaited him, the ravaged face. Instead he cleaned his teeth with exacting care.

The teeth were the worst part.

His uncle Mandy had warned him. Ran in the family it did, this terrible curse. As a boy back in Columbia he had feared Mandy’s big teeth. They were like something from abuelita’s fairy tales. But his tio had given him the only practical advice that had paid off.

‘Get yourself a hot tub, mijo.’

His job at the Page Museum didn’t pay all that well, but he scrimped until he could afford one. It meant taking the bus from Burbank to the La Brea Tar Pits every day, but he got a lot of reading done that way. He could have moved nearer to work, yet Carlos could not resist the allure of Burbank.

It was the lawns, of course. Verde, que te quiero verde, as the master wrote. A part of him thought it was a sick sense of guilt to put himself in the midst of so much temptation. Nevertheless as he grabbed a towel and slipped out into his backyard Carlos inhaled the rich fragrances of freshly trimmed grass, mulch and budding flowers and his determination returned.

He would find a cure. The curse would be lifted…