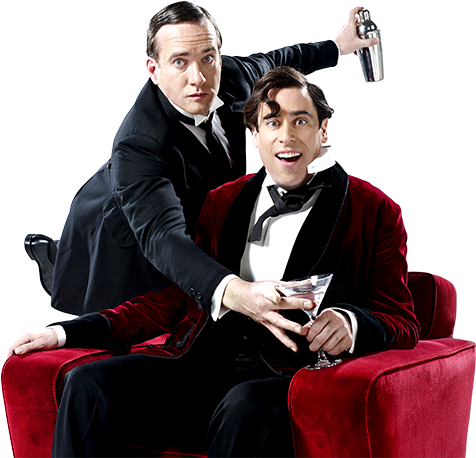 On my first night in London this past week, I found myself in Leicester Square pondering the embarrassment of riches. I wanted to see  a play and followed my usual plan of visiting the Half Price ticket booth to see what I could get for cheap; London theatre is a lot cheaper than Broadway, but still relatively expensive. I knew I ought to want to see Much Ado About Nothing with Vanessa Redgrave and James Earl Jones — after all not one but two legends! But it didn’t hit the mark for me (and I am relieved to hear that it’s been described as ‘disappointing’ for my own selfish reasons). I considered Jez Butterworth’s Mojo but it didn’t feel right for the night.

How can I resist a little P. G. Wodehouse?

Well, I almost did, because I don’t like Stephen Mangan. I never watched Dirk Gently because I dislike Mangan’s oily smugness. Perhaps his character in Green Wing overrides every thing else, but I can’t put it aside. But I did, because obviously I chose Jeeves & Wooster. My adoration of Wodehouse was enough to overcome that doubt and I like Matthew Macfadyen well enough. Most of all, I wanted to laugh and as much as I love comedy, it’s actually very hard to make me laugh.

So, I’m delighted to say I enjoyed Jeeves & Wooster. Yes, it’s quintessential Wodehouse and it might be well-trod ground with Fink-Nottle and Madeleine Bassett and policeman’s helmets, it’s still terribly funny stuff. Wodehouse’s Edwardian world is so much a construct it might as well be called fantasy, but it’s a delightful (yes, my favourite word) one.

It’s a three-hander: Macfadyen and Mangan are joined by Mark Hadfield and they play all the roles. Mangan stays in the role of Bertie and he brings to the role something that gets buried in, for example, Hugh Laurie’s charming embodiment of the role: what an awful person this privileged young man would be if you had deal with him in real life. Mangan gives him an energetic enthusiasm.

Macfadyen plays the shimmering Jeeves with a little more realism, I suppose it is, than the quintessentially perfect version of him played by Stephen Fry. You can see his exasperation with his gentleman and at times you wonder if he can keep up the charade. Plus Macfadyen has to play other roles, including Madeleine Bassett’s grumpy father and her cousin Stephanie “Stiffy” Byng — once in the same scene and that’s where the real fun lies. It’s the kind of thing you can only do in live theatre, quick changes and a dropping of the fourth wall.

There’s a lot of fun in the quick and sometimes incomplete changes, in Bertie’s pride in his own (as he sees it) fabulous performance and his amazement at Jeeves’ mastery of the magic of theatre. Hadfield constantly ricochets between the butler Seppings, Aunt Dahlia and the ever-taller arch-enemy to Bertie, Roderick Spode.You’d have to be churlish indeed not to get caught up in the fun of it and the very full audience in attendance that night showed their appreciation with enthusiasm.

A fun night out for us frivolous folk: I recommend it. If only more women got the opportunity to do shows like this, sigh. AbFab on stage: could it work?