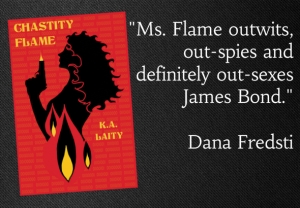 I got an update from the editor of SpyFi and Superspies, the collection of essays on the influence of James Bond in all his permutations upon popular culture. It’s on track so edits should be here soon on my piece about creating the Chastity Flame franchise.

Franchise? Did I just write that?

I guess after a trilogy it’s possible to think of it that way. While designing the third cover for A Cut-Throat Business, Stephanie asked me “Are you going to be writing more of these?” I think her concern was mostly with design, but I joked and said “I’m sure Kem will tell me I am.” Publishers have definite ideas about what writers ought to be doing to help themselves. 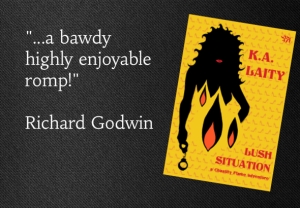 I’m never short of ideas: yes, I do know what happens next. Of course I have a head exploding with ideas, so my biggest problem is deciding which five projects to start on next, because you know…argh! My inability to do one thing at a time: I’ve learned to work with it, but it can be a bit manic. And make things hard to predict, too. I am often swayed by fiat, coincidence and a cajoling editor or publisher. I have a big to-do list that I revise periodically, though at the bottom it always screams at me No new projects!

So it’s kind of funny in the midst of all that flibbertigibbetness to see that some obsessions stay with me a very long time. I know I’ve mentioned before that the novel I wrote in high school was also a “spy thriller” of a sort. One of my childhood friends claims to have a copy of it (and threatens to unveil it if I ever get famous — more fool you, ha!). I suppose it’s possible that I might turn up a copy somewhere in my boxes in the garage of the NY house.

This is how old I am: the manuscript was typed on paper. Look up ‘typewriter’ on Wikipedia, kids. There are copies because I used ‘carbon paper’ which dates to the early Jurassic period, I think. This is back when computers relied on ‘punch cards’ instead of keyboards. I won’t make jokes about walking to school in the snow because, well — Snowpocalypse. 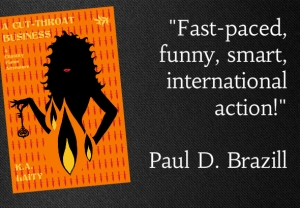 What do I remember of it? It was called Ace Spies Incorporated and I used a pseudonym as my author name (my favourite flower plus the last name of the singer whose scratchy 45 I was listening to a lot then in my retro outlook). Long before The Man Who Knew Too Little, it was a spoof about a woman who signed up to play a spy and then gets caught up in actual spy shenanigans. The worst kind of Mary Sue-ing took place as I made the Beatles into the other characters, cleverly disguising their names by changing them to Johann, Pablo, Hermann and gosh, now I’ve forgotten what I used for Ringo, though he got to play the big baddie and was very over the top, Peter Sellers-ish sort of gooning.

I’m sure it was pretty much awful, cringeworthy and full of in-jokes with my friends (still working on the latter though I think I’ve gotten away from the other two — I hope). But I had fun and learned a lot about writing something long form. I had written film shorts, lots of silly short pieces, short stories, short dialogues — you got it, short things. I even had what I would learn later as the legendary ‘middle muddle’ where the story begins to go all wrong and gets bogged down. I also learned that talking about it endlessly taxed friends who were not writers (sorry, Chris!) and at the same time learned the simple lesson that laughing about it helped (thanks, Chris!) and sometimes a simple yet profound change fixed everything (someone changed allegiances and complicated everything in totally different ways).

There’s probably not much that Ace Spies Incorporated gave to Chastity Flame, but from the acorn do mighty oaks grow. Or at least from a goofy teen-age novel has a grown-up series of novels sprung. I should have dived right into another novel after it. What happened? I went to college and learned what I was ‘supposed’ to be writing. I tried to write it (yes, even poetry dun dun DUN!). Eventually I realised I had no interest in writing suburban novels of despair and little epiphanies or the like; I wanted to write what was in my head — all the crazy tales of magic, horror and sublime nonsense ready to spill out one way or another. Believe me, they’re much better in books than in life. I like my life quiet and my books crazy and not the other way around.