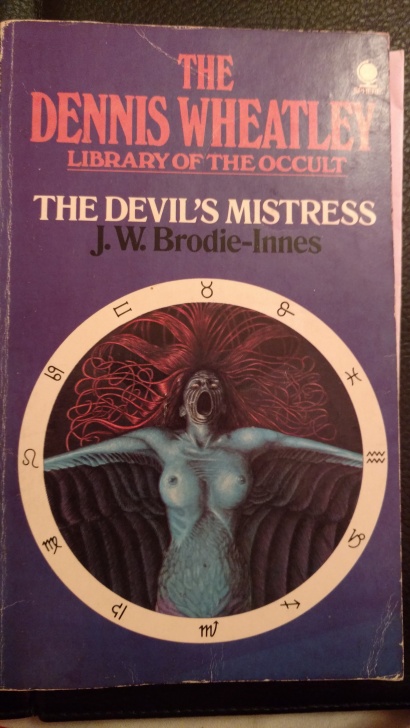 I taught a course on witchcraft and the witch hunts in the fall semester. Don’t ask me what took so long to get around to it. As usual with new courses I stuffed far too much into it, so I’m going to have to rethink before I teach it again.

Among the fun things was getting a little obsessed with Isobel Goudie, the Scottish witch whose confession is responsible for a lot of modern views on witches. There have been novels written on her (this is one, I’ve got another to come, both picked up for pennies here) but also a symphonic work and a pop song.

As Wheatley points out in his introduction, one of the first things to intrigue is Brodie-Innes’ dedication in the volume: ‘To the memory of my dear friend the author of Dracula to whose help and encouragement I owe more than I am at present at liberty to say.’ He also mentions the continuing history of which Brodie-Innes writes. In his own introduction the author reiterates the historicity of the narrative: ‘All the leading characters in the story are actual historical persons, and the incidents told of them vouched by contemporary writings.’ In fact, many from his own family’s history like Patrick Innes.

This reliance on historical record makes the opening pages a little dry, rather like Harker’s diary entries at the start of Dracula but soon we are in the mind of Isobel and things pick up. The old story of beauty married to age (as well as a sour and miserly disposition) gets the added complication of a woman with ambitions for art and knowledge.

So yes, Isobel sells her soul to the Dark Master, who promises her that ‘Knowledge is power’ but with a loophole: he cannot affect her Catholic baptism, only her false Reformed one. This loophole is important and she holds onto the gold cross hidden within a simple shift for it works a magic equal to if different from that of her dark lover. It also provides an important theme in the clash of the Cromwellian reformers with the royalists — a lot of the trials of ‘heretics’ and ‘witches’ had a deeper political cause.

Then there’s the world of faerie, which delights Isobel even more than the wild hunts and tasty revenge that her dark lover gives her. From their realm only does she see the whole of creation and realise what power the devil has — and has not. She’s torn between that land’s delights, her loyalty to friends and the perilous struggle for her eternal soul.

All of which makes for a fun read. Lots of folklore and old rhymes, too. There are rituals, Hecate, fae fun, wild hunts and even a Hand of Glory. Some snippets:

‘Nay, she would not be chattel; she refused to be bought. She belonged to herself. No human being can be bought thus in free Scotland.’

‘The Lord rade fair and free
Ower the hills til Galilee;
He pat the blood to the blood till all upstood,
The lith till the lith till all took with.
Owr Ladie charmed her dearlie son, with her tooth and with her townge
And her ten fingaris.
Be ye then hail and well,
In the name of the Father, Son, and Halie Ghaist.’

I suspect I will be digging more into Goudie’s confessions as I explore some more. You can explore more overlooked books at Todd’s blog this week. 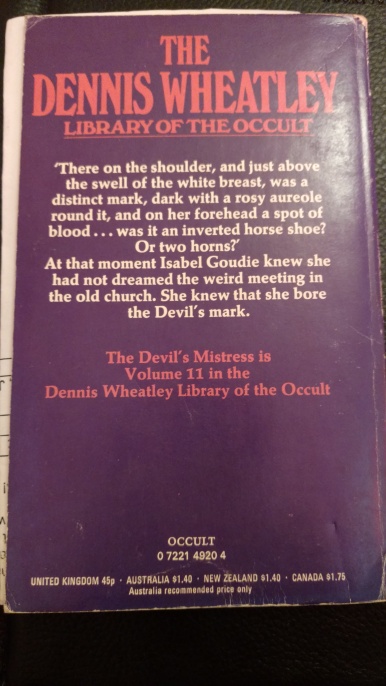