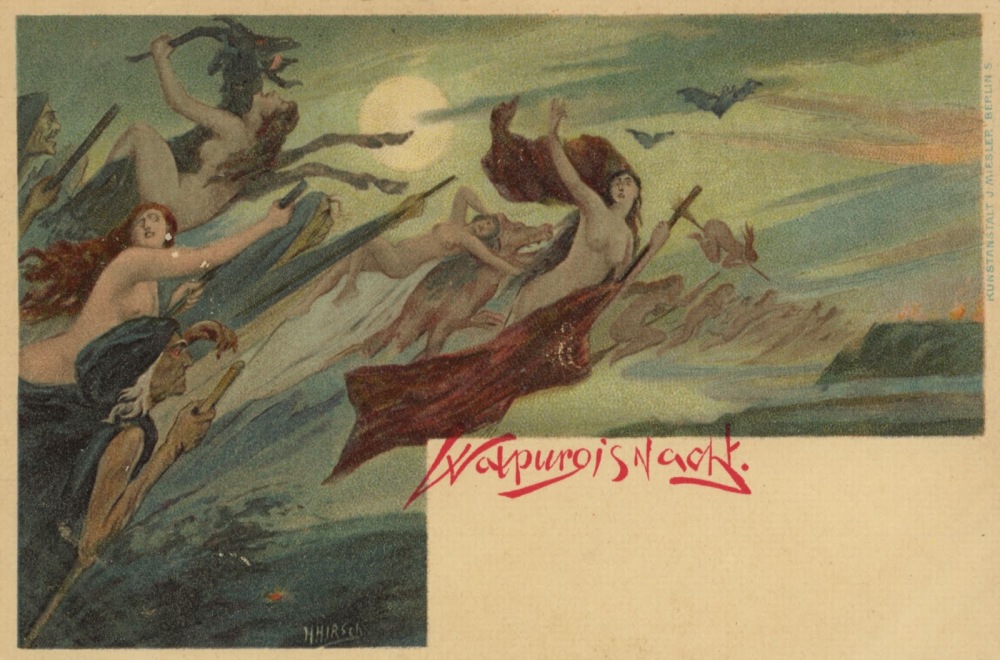 Tradition now to repost this story which appears in Unquiet Dreams. It’s been reprinted a few times. One of these days, I should do an audio version…

Walther knew. But he could not resist, what ten-year-old could? Every year was the same. Grandmother Dunkelhaus would shake her finger at him and warn, “Walpurgisnacht, the devil’s night—you stay indoors. Devils, witches, ghosts—they come, they get little boys, eat you.” Then she would snap together her shiny wooden teeth—clack!—as if she knew the flights of witches first hand.

But this year—tonight!—he would know, he and Elsa. “We must see,” they had promised one another. Walther slipped out this afternoon, to sleep a while in the orchard as Elsa had suggested. The nap should help him stay awake tonight. He had put apples in his rucksack and a handful of matches—also Elsa’s idea. She swore she would sneak away with a lamp. He looked around the room; never know what you might need. His woolen cap and sweater would keep him warm—spring was on the calendar, but not in the night air.

Downstairs his family gathered round the fire. Its crackles and sparks echoed up here in the garret, where they all assumed their youngest slept. But Walther waited for Elsa, his rucksack on his shoulder, his eyes eagerly seeking through the darkness. A movement: only leaves, caught by the tempestuous wind, they whirled and danced, begging someone to join their waltz. Walther cocked his ear back toward the group downstairs but heard only the familiar murmuring argument, Gran and Grandfather arguing still, as they had these sixty odd years.

Another whispering movement, this one with legs. Elsa beckoned from the oak tree, almost disappearing in its enormous girth. Walther lifted up the window silently, swinging himself over the sill, hanging for a moment, then dropping to the ground ten feet below and rolling as he hit the ground. The apples would be bruised.

“Wally. Here.” Elsa swung a lantern by her side. A battered rucksack lay at the foot of the gnarled tree. “Did you bring the matches?”

“Yes, a lot of them. Good kitchen matches, wooden.”

Her grey eyes caught the moon’s bright glow and reflected it back to him despite the fading bruise below her left one. Elsa’s face, wind-swept and tear-stained, tilted up at him, her decisive chin jutting out. “Let’s go,” she said, taking his offered hand.

The two children ran between the darkened trees, feeling the limbs bend down in concern as if trying to stop their flight. Out of sight of the house they slowed their pace, their breaths making curlicues in the night air.

“Did they suspect?” Elsa asked, wiping her dripping nose.

“No, no one even checked on me—not that they normally do,” Walther hastened to add, a man after all at age ten. “And no one noticed that I was gone this afternoon either. I feel quite awake.”

“I got this too,” Elsa said and stopped to root through her rucksack. She pulled out a flask that had perhaps seen action in the Great War. “Coffee. Help us stay awake. It’s cold,” she added with regret, “But I think it will still work.”

“I’ve never had coffee before. Well, once. I sipped my Gran’s coffee. She said it would put hair on my chest.”

“Did it?” Elsa shook the flask and the contents sloshed noisily.

“No,” Walther kicked the ground, wishing he had thought to bring coffee. “But I did feel stronger.”

“Come, we have to walk faster. It will be midnight soon.”

“Did you bring a watch?”

Elsa halted and whirled around. “Damn!”

“Oh, I don’t know about that—never had coffee, never can swear.”

“Do you think we should go back and get a watch?” Walther asked, trying hard to change the unpleasant subject.

Elsa pondered the question, pulling her wool socks back up over her knees which looked bluish and cold by the light of the indifferent moon. “No, I’m sure we’ll see them all. It should make quite a ruckus after all. Your Gran says she hears them all the way in your house.”

“Perhaps she exaggerates, but come on, it has to make a lot of noise, all that dancing and drinking and wild songs. I’m surprised that we haven’t heard it in the past.”

“We were too young,” Walther said wisely. “Now that we are older we will go and see it for ourselves and we will be able to tell the others all about it. How envious Marta and Lulu will be when we tell them.” Walther could see himself telling them, pretending to be bored by it all as if Walpurgisnacht came every night and he had flown with the witches a thousand times or more.

“We’re here,” Elsa said quietly. Walther roused himself from his daydream, saw the cold granite wall of the cemetery before them and shivered. Suddenly the adventure seemed less welcoming than his warm goose-down bed.

Elsa stared at him. One eyebrow arched upward in the derision he knew so well. “What? You can jump out a window but you can’t climb a fence? Boost me.”

Walther bent over dutifully and clasped his hands. Elsa put one ill-fitting shoe in his palms and vaulted up, giving Walther a brief glance of her switch-scarred thigh. “You should have worn trousers. You’ll be cold.”

Elsa regarded him haughtily from the top of the wall, but said nothing and swung her legs over. He heard her landing ‘plop’ on the other side. He shrugged off his rucksack and threw it as gently as he could over the wall. Elsa must have caught it, for he did not hear it land. Inhaling deeply, Walther gathered himself and leapt. In vain his fingers fumbled at the cold surface and he slid back down. One two three, and again inhale—this time his fingers caught and, feet pedaling like mad, Walther pulled himself up to the top of the wall. Down below Elsa waited, her hair touched by moonlight, her eyes grown large in the darkness. Someday we will be married, Walther thought helplessly, then threw himself down to the ground beside her.

“I know where we should go,” Elsa hissed, whispering as if the dead might hear. She led him over to the Wahlberg crypt with its big angel and mourner’s bench. They lit the lantern and sipped the coffee, which both declared delicious, so delicious that they would save it for later. Walther put his arm around Elsa to try to keep her warm and was almost at once asleep.

The sound that awoke them was neither a cry nor a scream, but a song. It was not a melody they knew. Suddenly conscious, Walther mistook the singing for his father’s snores, reached for the covers he must have kicked off—and suddenly noticed where he was. Elsa’s jaw hung low, her mouth forming an ‘o’ as she stared at the scene before them.

Witches, mad witches, gathered around a sparkling bonfire, chanting their happy praises to the night and waving sticks about. Corpses danced—a waltz, a mazurka, a reel of unknown origin, their wasted limbs carelessly free as they swung their partners high and laughed and bowed. Were they devils over there?—demons, maybe—that leaped about in some wild game, running back and forth, hiding behind the crypts, their shaggy hindquarters a curious surprise attached to their manly torsos. And there! In the sky, barely over the goat-men’s heads, ethereal will-o-wisp women, seemingly made of little more than moonbeams and dust, whirled and swooped and shrieked in glee. The night was alive with shouts and motion. Everywhere they looked some ghoulish creature jigged or crooned or guffawed with pleasure. Joyous music rose—from where did it come? There! The few spindly trees that usually hung silent and brooding over the solemnity of the graveyard, tonight rubbed spidery branches together for a cricket’s song, a lively tune that led the dancers and lifted the spirits.

“Stay back,” Walther hissed, grabbing her hand. Elsa turned in surprise, her eyes a-glitter with the dazzling scene before them. “You don’t know what they’ll do! Evil, Elsa, they’re devils.”

Walther stopped to consider this logic and she, laughing, ran from him to join the revelers. At once a space broke in the ring of dancers, hands reached out to welcome the little girl into the circle. Around and round the open grave they wound, throwing laughter and cries up to the skies, a merriment of sinless delight.

“Come back,” Walther said weakly and even the gentle breeze did not carry his words far. But he could not make his feet move. The words of the Reverend Lochrie bound him fast—such beings were demons, they imperiled your soul. No matter that their raucous, giddy sounds beckoned in endless joy. Happiness was not to be trusted; the way of God was hard.

Yet Elsa danced—and laughed—imagine! Elsa laughing. The bonfire flickered in her face, her eyes—rapture flew from her lips as song. But still his feet were lead, were stone. Grandmother Dunkelhaus’ words came unbidden, “They get little boys, eat you!” Walther realized he had clutched his rucksack protectively before him as if its battered sides could shield him from the devil’s spawn. Elsa took no such precautions. Her rucksack lay behind him on the bench, abandoned.

Then the clock began to strike.

What time was it? How long had he stood transfixed by the spectacle? The second bell and the dancers stopped, dropping hands with a palpable reluctance and many wistful glances. A third chime and the witches stamped on their roaring bonfire, swatting at it with their sticks and brooms, still caught by their infectious laughter and dancing away from the lively sparks. A fourth chime—how many more could there be? Was that the dawn peeking over the edge of the world so soon?—and the goat-men and the whispering sprites sprinted for the cover of the woods at the far side of the cemetery. They called back and forth, promises of revels yet to be, stories of the night that was.

Fifth bell and the witches mounted, each testing the winds with a wet finger in the air, each choosing her own course. There! A very old witch, surely two or three hundred years by the look of her wrinkles and her grey, tasseled locks, but with the gentle face of somebody’s grandmother—despite a leering scar that raked her kindly cheek. She offered a hand to Elsa, who took it gladly, without looking back.

That broke the spell. Walther’s feet moved and he thrust his rucksack from him, running pell-mell to catch her, to stop her—maybe, just maybe, to join her. But the final bell was ringing and Elsa was waving, a grin lighting up her face as if the bonfire now burned within her heart. Elsa, Elsa; he couldn’t even yell her name, it was too late, she was gone gone gone like the last echoing knell of the bell. But two words echoed back, two words of magic, flying from the receding spark of fire. Two words that gave him hope, that made his heart yearn and the dreams live yet in his breast.