Okay, so writing the title like that makes me sound like a serial killer, doesn’t it? Okay, so I knew the interview I did with Donna Liquori was going to appear at some point, but I had no idea it would have my face in GIANT size. I saw the web version first because a couple of sharp-eyed folk posted it to my Facebook page. I had been off in Brigadoon, so I didn’t know it immediately. No WiFi out there.

So it came as a nice surprise that the interview I assumed would be some kind of back pages filler was actually a feature. Wow, and how fabulous to highlight the wonderful art of SL Johnson. And also the wittiness of my pal Terry. Nice spot illos of the fine covers for Weird Noir and Chastity Flame. I’m still chuckling at the title, heh. I had told Donna that I had yet to be quoted accurately by any reporter, so she recorded the interview and even captured all my stumbling stammering rambles, so I guess I can’t say that anymore. Har! It was a fun interview and I just babbled on and on. I cringe a bit at some of the tweets. What I like about Twitter is its ephemerality, so eek. And I should mention that the buzzing exit sign was fixed relatively promptly.

World famous in Albany — well, among people who read the paper. I had to go hunt up a print copy just to see. Mary and Edie and I had some prosecco last night to celebrate. I hope my fifteen minutes aren’t over now!

Last day of classes. WHOO and HOO. This semester has been really a chore and it’s mostly my own fault because I couldn’t quite reconcile myself to being back. I expect the return in January will be a little less painful. I am however counting the hours until I get on that airplane Friday and get back to the land where I belong — and a certain someone, too. 🙂

Hey, have you got your copy of Just Desserts? A free recipe book from the folks at Tirgearr Publishing including all the staff and writers and artists like the QoE. The Tirgearr writers will be featured today on Dellani’s Tea Time radio show. Drop by and hear some snippets from stories and fun chat and who knows — maybe there will be some books given away!

And there’s a chance we might close on the house — it’s hard to say, as our lawyer seems to have gone to the Lionel Hutz School of Lawyering School, so we may have to make use of the Power of Attorney I signed over to Robert. Endless paperwork! But soon we may have a 200 year old house to make pretty. Well, I will park my stuff there while Robert makes it pretty. Fun! 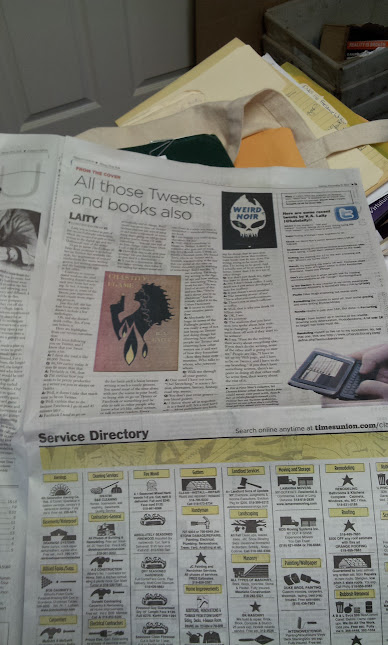