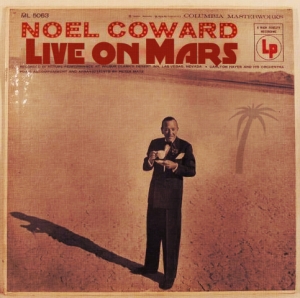 Back in 1955 Noel Coward effectively caused the desertion of Hollywood of the glitterati when he took up a post in the Desert Inn, Las Vegas. For a month he charmed his way through sold out performances that drew the likes of tinsel town A-listers like Humphrey Bogart and Lauren Bacall, Judy Garland, David Niven and even the Rat Pack leader, Frank Sinatra. The LP from the legendary month dominated the charts despite the nascent rock-n-roll rumblings and of course Elvis and the other teen heartthrobs.

By 1971, however Coward found himself spending more than his wealth of royalties could sustain and an ill-informed financial advisor persuaded Coward to attempt to modernise his reputation by delving into the stylings of the latest gender rebel, a certain David Bowie. Having heard the glam rocker’s new song “Life on Mars” while visiting his London recording studio, Coward’s personal manager Lucas Case urged him to hop on board the glam racket and do a cover of the song in order to reach a new audience. Bowie’s only stipulation was that the cover not come out before his single had been released. It’s uncertain who had the idea of making a concept album, but the team quickly ran with the idea and the elderly and somewhat dissipated bon vivant did little to interfere.

The project of course was a disaster. Farmed out to the drug-addled team at Columbia’s London offices — at that point rivaling Apple Records for employee vandalism and bizarre orgies (Google the pygmy goat incident if you have a strong constitution) — the work all around was slipshod. Thousands of pounds were paid to “whiz kid” designer Johnny Stephenson, who squandered the money in nightclubs like the Bag O’ Nails (where he famously painted a nonplussed George Harrison blue in a fit of pique whilst the former Beatle was in a deep trance). Caught short with a deadline, the artiste merely slapped a new title over the original Noel Coward at Las Vegas LP jacket, managing to get the wording wrong, and adding a reddish tinge as well as an inexplicable palm tree.

The contents of the LP fared little better. Apart from the Bowie track which the old trouper delivers with admirable sang froid and cheekily alters the lines, “But the film is a saddening bore / Because I wrote it ten times or more” as “That film is a sodding bore / Because I rewrote ten times for Gore” which has usually been interpreted as a sneer at the always combative “frenemy” Gore Vidal. The other tracks, however, seldom rise above the perfunctory, with “Let’s Do It” updated for interplanetary travel (“Venusians do it, Plutonians do it” etc. sounding very creaky) and the dreadful new songs penned by Coward between martinis showing his complete lack of information about the titular planet (“Cheeky red planet / much further than Thanet / how many hours away?”). The feeble attempt to resurrect the past by updating his old standard to “Don’t Let’s Be Beastly to the Martians” imagines an appalling population that even a Robert E. Howard hero might quail to visit.

Better to remember the Vegas visit, a clear triumph for Coward and all who attended. Columbia shuttered its London office soon after, citing numerous arrests of employees. No one knows what became of Case. Another rock-n-roll casualty, no doubt.

See the roundup of overlooked gems at Todd’s blog.