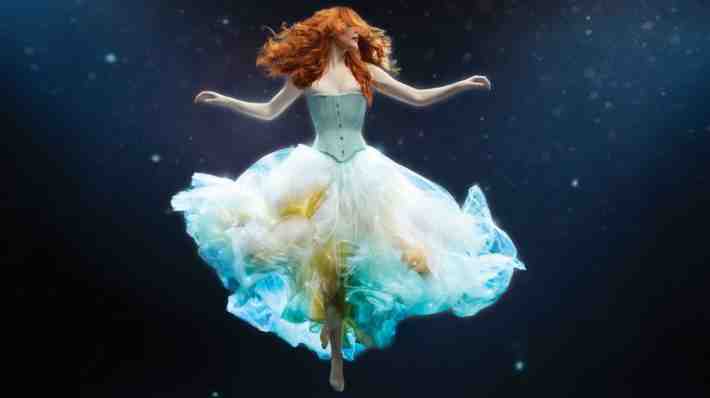 You can count on the National Theatre to offer interesting projects and imaginative stagings, so I was delighted to hear they were doing a musical with Tori Amos. Of course The Light Princess was so long in development that I had missed the news that it finally opened! Fortunately a fellow writer posted on it, lamenting that she could not get to London to see it and I got a ticket at once, knowing I would not regret splurging on this performance.

The play is based loosely on George MacDonald’s Scottish fairy tale of the same name, which tells the tale of a princess cursed to have no gravity in both the literal and metaphorical sense. Amos and her collaborator Samuel Adamson turn the tale into a very modern one that touches on serious issues like environmental devastation and cynical drives to war, but the story really centers on the conflicted messages for girls in modern culture — the push toward frivolity, the scapegoating and victimisation and the sheer terror about their sexuality.

But it’s done with magic, so it seldom feels like a heavy-handed message — in fact, it soars. Director Marianne Elliott has done a fantastic job with her cast and the music and musicians are, of course, superb. You can’t imagine any less from Amos. The puppetry and aerial effects are a wonder. The four acrobats who make the princess float are so effortless and integrated to the visuals that when they switch to wires during her dance with the prince, it takes your breath away because all at once she seems to really be flying.

The cast shines. Rosalie Craig has already won Best Musical Performance in the London Evening Standard Theatre Awards this year for her portrayal of Princess Althea, and you may have seen Clive Rowe belting out a song from Guys & Dolls during the National’s 50th celebration — simply stunning both, but the whole cast is amazing and treads a very fine line between the mythic and the modern, swinging from grief to soaring joy with such skill.

I want this on DVD so I can watch it over and over, and give it to friends who couldn’t get to London to see it and I hope it comes to Broadway, too. Oh, sure, there are quibbles here and there but on the whole I was absolutely delighted with the look, sound and thrill of it. I even bought the programme which has a bonus essay from Marina Warner about the power of fairy tales. And when we came out of the matinee, all of us floating above the lobby carpet, we heard popping sounds and rushed outside to see the Lord Mayor’s fireworks. Magic.

See the full cast & crew and remember these names.

Interview with Tori on the development of the production.

The Fox Pocket series now has a video trailer.

I’m over at Savvy Authors talking about how outlining can save you time and frustration and speed up your writing.

I’m pleased as the proverbial punch by the kind words from Vince Zandri on my Chastity Flame series:

“Londoners (and the world) beware! How can you not be drawn into the fire by a beautiful but lethal dame by the name of Chastity Flame? K.A. Laity has been proving for quite some time now that her noir prose ranks right up there with the likes of Meg Abbott, Dorothy B. Hughes, and Sara Paretsky. A Cut-Throat Business only further solidifies her standing as a contemporary master of the genre.”