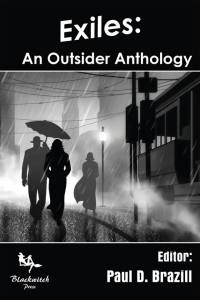 Whoosh — that’s the sound of January speeding past. It feels as if the holidays just ended, yet here we are almost at the end of the month. Which means hey! It’s Miss Wendy‘s birthday today 🙂 Happy birthday, my friend.

Bits of news from my frenzied activities of late: publications of course, also knocking the travel schedule into shape for the year. I am always revising my to-do lists but they never seem to get shorter. Well, I thought it had for a moment, then I realised it only had fiction on it and none of the non-fiction. D’oh!

Extricate, my alter ego‘s noir novella, is nearly out.

Exiles: An Outsider Anthology, a collection edited by Paul D. Brazill, features a whole bunch of writers including me, will be out in about a month’s time. All for a good cause.

SpyFi and Superspies: I just sent off the edits for my essay on James Bond’s influence on the creation of the Chastity Flame series. It was a weird sort of half-scholarly, half-personal piece. As soon as I know more about the release date, I’ll let you know.

Heroines of Comic Books and Literature is scheduled for March. You can pre-order it, but with the price in mind, perhaps you can get your library to order it. I hope it brings Christina of Markyate to more people’s attention.

The latest Meditations on Hávamál also out; hoping to aim for a more regular schedule.

The serial is back too! Airships & Alchemy is coming to a close in the coming weeks. I will doubtless put it all together, like The Mangrove Legacy. I’m already thinking about the next serial (madness). Of course, The Big Splash is out there, too!

High Plains Lazarus, the zombie western, has been expanded and will appear as a ‘single’ novella from Tirgearr. Details soon —

Things are always subject to change and unexpected cancellations, but as always plan for the best, roll with the punches.

MARCH/APRIL — I don’t have the dates yet, but I plan to be in the States. Waiting to hear about a London event that’s supposed to be February but I suspect may be late or even March. At a certain point I will choose if they have not scheduled it. On the way back, my plan is to visit the lovely Miss Chloë in le Swiz. I have never been there, though of course Chastity Flame has.

MAY – probably Ireland! Details to be determined.

AUGUST – I will be attending LonCon 3 and giving a paper; I’ll also be attending Shamrokon before heading back to the States (sob!)

SEPTEMBER – I’ll be speaking at the Crime Fiction Here and There Now and Then conference in Gdansk. Exciting!

NOVEMBER – I will be at NoirCon in Philadelphia. No details yet but when I know them, I will share the info.

DECEMBER – back in Scotland 🙂

Another one of those fabulous Twitter conversations that creates the unexpected: the proposed ‘MocGonagall’ — mock chop [a Scottish delicacy] in the shape of McGonagall’s profile. Love it, Bill Herbert! 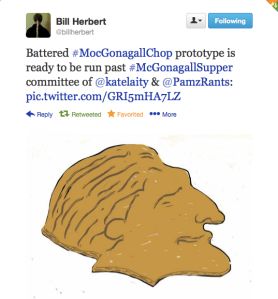