Thanks to Angela (check out her fab writing at the Cultural Gutter), I was introduced to this interesting novel by the famous-but-largely-erased author Marie Corelli. The Sorrows of Satan was a sensation upon its release and a scandalous bestseller, so it’s typical that it has been overlooked despite its broadly appealing topic — Faustian bargains continue to fascinate western culture. Oscar Wilde was a fan: that probably tells you all you need know!

The daughter of Scots poet/song writer/essayist Charles Mackay and his servant Elisabeth Mills, Corelli was baptised Mary Mackay but took up her Italianate moniker first when performing on the piano then repurposed it for her writing career. From the beginning of her career, men decried her books and sneered at her ambition (shock!). They sold hugely all the same.

Titbits: she dunked on snobbery and the press, believed in reincarnation and astral projection but maintained she was a devout Christian, warned George Herbert to heed the curse of Tutankhamun, probably a lesbian — in any case left her fortune to her longtime companion Bertha Vyver — and was probably the model for E.F. Benson’s Lucia stories for she did indeed bring a gondola from Venice to float down the Avon. 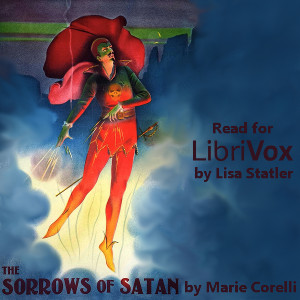 The Sorrows of Satan is also available as a free ebook at Librivox. Here’s the Wiki summary:

On the surface the plot follows the story of a penniless, starving author called Geoffrey Tempest. So poor that he is behind on his rent and can barely afford light in his room, he receives three letters. The first is from a friend in Australia who has made his fortune and offers to introduce him to a good friend who might be able to lift him from poverty. The second is a note from a solicitor detailing that he has inherited a fortune from a deceased relative. The third is a letter of introduction from a foreign aristocrat called Lucio, who befriends him and proceeds to be his guide in how best to use his newfound wealth.

Tempest remains blissfully unaware throughout the novel, despite warnings from people he meets, that Lucio is the earthly incarnation of the Devil. Over the course of the book, his wealth leads to misery. Eventually, when confronted with the true nature of his companion, he renounces evil and returns to society penniless but content with the chance to purify his soul.

Although the plot follows Tempest’s fall from grace and subsequent redemption, he is in many regards a secondary character to Lucio. Both the title of the work and much of its philosophical content relate to the supreme yearning within Satan to achieve salvation. The book’s main contribution to Faustian literature is the introduction of the concept that above all other people it is Satan who most truly believes in the Gospel – and yet he is forbidden ever to partake of it.

Since it is a rather lengthy novel, I cheated and watched the silent film the other night, which features a dashing Adolphe Menjou as old Scratch himself, Ricardo Cortes as Geoffrey, and Carol Dempster as the poor, virtuous, struggling writer Mavis Claire — Mavis is a name Corelli invented and popularised.

It is not a high quality copy, though your can get DVD-R copies fairly readily but I would want to see samples for quality. Back to the book now!

Here’s a fab image of Corelli from a site that gives a nice summary of her life.