I chuckle whenever people make solemn pronouncements on social media that they’re taking “a break” or “detoxing” or “going cold turkey” from — your guessed it — social media. There’s a very Puritan air to these declarations that rubs my natural idleness the wrong way. It’s always in the name of “getting more done” or “accomplishing something” of some importance, of course. I do understand the urge. Having been persuaded into the low-level gaming world of The Simpsons Tapped Out and Plants vs Zombies (now PvZ2 It’s About Time!) I do see how easily seemingly inconsequential things can steal your time away.

But that’s no so bad.

“It is impossible to enjoy idling thoroughly unless one has plenty of work to do. There is no fun in doing nothing when you have nothing to do. Wasting time is merely an occupation then, and a most exhausting one. Idleness, like kisses, to be sweet must be stolen.“ ~ Jerome K. Jerome

I’ll tell you a secret: we need idleness. We need to fritter away a certain amount of our time in silly pursuits. I know I have a reputation for doing “too much” — hidden cameras would reveal a different story — but I am incapable of really doing too much. I’m an inveterate idler, particularly so when there’s much to be done. Jerome was spot on: stolen idleness is very sweet indeed. And as every student and worker knows, the rush of an impending deadline is also delicious — at least in retrospect. We need deadlines to figure out how much goofing off we can fit in between.

But don’t pretend that flouncing away from social media immediately equals productivity. There are still windows, pets, phones, putting things on top of other things and if all else fails, cleaning. 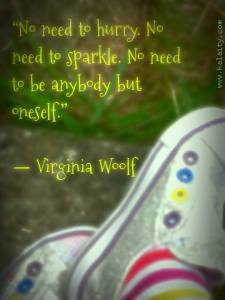