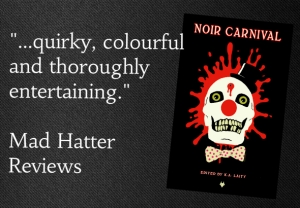 THE CLOWN
K. A. Laity

It was the clown.

The party had been lively enough before her arrival. She promised fun on her website, that balloon-littered vomit of Pantone tones with too many gurning gifs.

But the children were weeping now and several demanded to go home. Unmitigated disaster.

Not everyone could tell jokes, eh?

[Written for the Scottish Book Trust 50 Words competition; alas, not a winner though I deliberately did not go for the original dark ending]