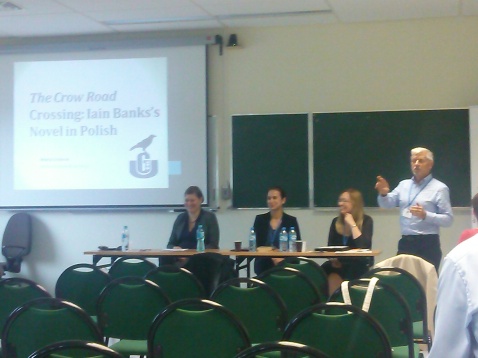 Day Two kicked off a bit later for which I blame the two Pauls, of course. I missed the keynote! And it was on college mystery novels, so I hope to read it in the proceedings in the future. Ditto for Fiona Peters’ presentation on Barbara Vine; and I need to get to work on the Highsmith paper I owe her (by the end of the month, yes, I know!).

The schedule got shuffled a little bit because of some last minute cancellations (grrr!) but I did make sure to catch the ‘Tartan Noir’ panel and was amused to hear the crows chiming in outside the window as Marta Crickmar talked about the translation of Iain Banks’ The Crow Road. Agnieszka read from her dissertation work on Ian Rankin. Although apologetic about the quality of her paper due to being tied up with conference duties, it was of course superb. Monika Szuba talked about Dunfermline writer John Burnside who I definitely have to check out. Her discussion of Summer of Drowning fascinated me; it seems like a weirdly surreal journey that I’d want to take. His other books sound equally intriguing.

As usual it was hard to choose between panels most of the time but I’m glad I went to see the media panel. Anousch L. Khorikian gave a really interesting talk about Silent Witness that almost made me want to jump into the 17 (!) series of it, but I fear that may never happen. My Facebook pal and now real world friend Hector D. gave a lively talk on Breaking Bad that clearly proved an audience favourite.

Of course the big event of the day was “When Paul Met Kate” where the plan was just that Mr B and I would just blather on about any old thing and for some reason somebody thought that might be entertaining. Of course as the hour approached, Agnieszka became nervous because there was no sign of Hartlepool’s finest son. Paul Johnston offered to step in substitute Paul should it become necessary, but of course all turned out well as Mr B turned up whole minutes before the scheduled time.

But on the principle that two Pauls are better than one, Agnieszka asked if I “wanted to do a threesome” \O.O/ HELLO! with both Pauls and so we did — and it worked even better I think because Paul J is much more formal and was sort of stern with our shenanigans, so we were even more the crazy Katzenjammer Kids. I don’t know if anybody else had as much fun as me and Mr B but we sure did. People seemed to be laughing along with us and they bought up most of our books after (thank you, Adele and Agnieszka for arranging that and Arco for handling all the exchanges). I finally got signed copies of Mr B’s books for my own collection.

What did we talk about? Oh, I don’t remember. Ask someone who was there. I know I laughed a lot.

And afterward a lot of folks all went to the brew pub in the centre of Gdansk, so trailing the two Pauls I did the same and it was great fun. Although a big table is always a bit awkward, arriving late we sat at the far end so we got a mix of the dance music playing inside and the guy with guitar playing outside (what a strange playlist he had too, starting with ‘Ring of Fire’). I had this interesting platter of nibblies that included some great pickles. Fortunately people refused to tell Mr B the location of the karaoke bar so I never had to sing and Hector took pictures like this.

I’ll try to wrap this up next post whether I get to that today or tomorrow I’m not sure. Of course attempts to make it an early night because I had a keynote in the morning didn’t quite work…