As I idle along in my way, seemingly random and directionless at times, I nonetheless manage to be in the right place at the right time more often than one might reasonably expect. Friday night that was true, as I went with the delightful Mary Browne to see the ‘Scottish Night” with the Albany Symphony at the Palace Theatre, thanks to the kindness of Ruthy Baines, a woman of indefatigable spirit.

The evening started with an artist talk with percussionist Colin Currie and composer Julia Wolfe, led with great energy by music director Miller. I joked with Mary later that I imagined him springing out of bed each morning, shouting “Oh boy, a new day!” You know how I love percussion, so it was great to hear how Wolfe (whom I knew from Bang on a Can) came to write this piece for Currie which combines her love of history with her knowledge of folk and urban music within a classical setting. Not since Evelyn Glennie (what is it with Scots and percussion, eh?) have I seen a percussionist with such bravura. They collaborated closely on riSE and fLY, a body concerto, because so much of it is played on Colin’s body. The concert began with Sir Peter Maxwell Davies‘ evocation of a wedding taking place in his chosen home, Orkney. ‘An Orkney Wedding, With Sunrise’ was simply mesmerising and captured the narrative beautifully, from the opening bad weather, the gathering of the guests, the band tuning up, playing while the night got wilder and the guests and band drunker — then everybody making their way home in the wee hours and finally, sunrise. It was just magic. Not as austere as you might think of Davies in general; the final touch of the lone piper, David Weeda, really capped off the performance perfectly. I was so excited about the Wolfe piece and it was just as thrilling as expected. If you’re addicted the musicality of sound it’s always wonderful to hear unusual aural collisions. Julia Wolfe has created a piece that sounds like a walk through New York City on a warm day with the theme of body percussion. Colin Currie was rubbing his hands together, slapping his chest and arms, snapping his fingers, clapping his hands, sometimes augmented by the orchestra, sometimes not. There’s a huge solo at the end of the first part that’s just him. There was a moment in the solo that was meant to be a space of silence and outside the theatre a siren wailed in the distance — it was perfect! The second half Currie moved to a drum set made of buckets and trash cans. They had joked about it at the pre-concert talk, talking about how guest musicians demanded specific instruments and Currie had not been happy with the bass ‘drum’ and ended up replacing it with one of the Palace’s own bins. Like all the drummers down in the subway with their bucket assortments, it had that familiar sound, raw against the sweep of the orchestra who had to practice stomping along with the percussionist. It was simply exhilarating. I loved it. So is it any wonder that poor Mendelssohn felt a little shopworn at the end? I’m sure there were some symphony fans who didn’t like the newer pieces as much as this old favourite and to be sure, the orchestra played it with as much energy and delight as could be. This ensemble has a brightness in its style that shines through. But the Davies piece was so evocative and the Wolfe one just so exciting, it wasn’t possible to compete. We left on a high that the icy blast of the arctic wind outside could not dispel. I’ve neglected the Albany Symphony to my dismay. I will have to amend that, especially if they include such dynamic programming. And it’s always a delight to immerse yourself in the Baroque splendors of the Palace. 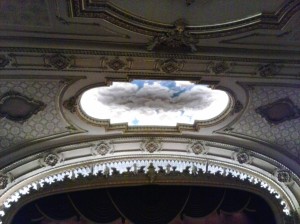