My last full day in London I headed over to the British Library to catch the Punk exhibit. On the way, I nodded to Saint Jerome‘s holy place:

It was quite gratifying to see PUNK emblazoned across that bastion of quiet intellectual historicism, though it reminded me of the line from that much-treasured film which I think was called What is Creativity? that we saw in 6th and 7th grade and then I have not been able to locate even though it has John Astin in it.

In the sequence that shows the history of art, there’s an exchange between two snakes (or maybe worms?) that goes something like:

Snake 1: Oh, for a minute there,  I thought I had something.

It was kind of glorious to see this in the lobby gallery of the venerable British Library. On the other hand, there was nothing much interesting that you hadn’t seen a millions times (well, I hadn’t anyway) and yes, the overarching impression was that punk was white and male. Here’s the ‘chicks’ corner:

I want to see that documentary on the women in punk. The snippets were tantalising. But the rest, meh. The shop — well, there was nothing there you’d want to buy. It was kind of embarrassing really. I was so glad to hear that Viv Albertine took it upon herself to make some corrections. Rahr!

So feeling dispirited — even the Beowulf manuscript was not on display! — and it being too early to head to my next destination, I decided to go to the ‘Shakespeare in Ten Acts’ exhibit in the main gallery. And I’m SO very glad I did — how energising!

This display focused on the performance history of Shakespeare’s works. Coming from the lit side of things, there is so much I don’t know about the practicalities of performance. I remain grateful for sitting in on the course at the Globe back in ’99 because I learned so much (besides, the Globe remains the only theatre where I have trod the boards). It starts with the Globe and Greene’s famous sneer, then moves to Blackfriars. I am sooo longing to see a show at the restored indoor theatre. And it was a real epiphany to realise that The Tempest was at Blackfriars, not The Globe as I’d always pictured it, which in many ways makes it more amazing.

Even more now, I wish I could be there for one night (in case the Doctor reads this).

It’s exciting to see how the plays rippled out across the world: Hamlet on an East India Company ship anchored off the coast of Sierra Leone in 1607, in India, in Russia. The first woman to play a woman’s role (Desdemona in Othello) in 1660 broke one barrier: the first black actor, Ira Aldridge, played Romeo briefly in NY in 1822, then sailed to London in 1825 to debut as Othello. He was just 17.

The exhibit details the bard’s censors, forgers, actors and visionaries, including a room that recreates in small part Sally Jacob’s astonishing design for Peter Brook’s 1970 intoxicating incarnation of A Midsummer Night’s Dream. It really is inspiring.

Go if you can: it runs through September. You can get yourself an Elizabethan ruff necklace. 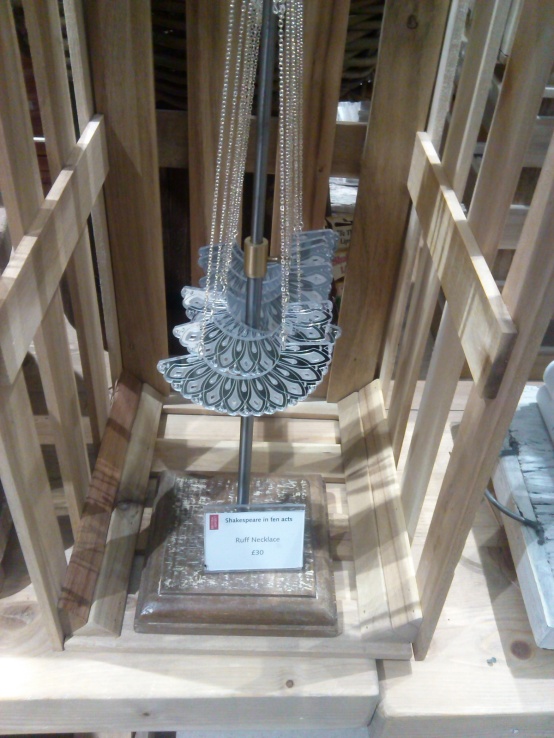