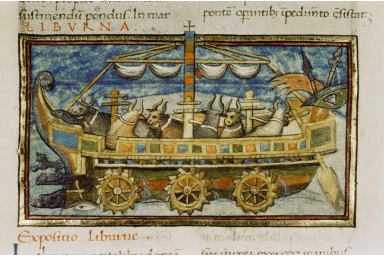 I shared my Inspirations Song List today as I’d updated it (Songs that Inspired Stories), then joked that I should make a list of stories that started from collisions. Not literally — although I do have one or two of those — but collisions of ideas.

Example: later this month Empty Mirror will publish my essay ‘Chaucer and the Art of the Grift’ which came from a collision in my head between The Canon’s Yeoman’s Tale and David Maurer’s The Big Con. It makes perfect sense to me but maybe this is why I have a hard time getting people to follow my thoughts. Possibly they seem random and incoherent!

But they seem reasonable to me. Here’s a random selection of things what I have written and the collisions from which they sprang:

How to Be Dull: academia & Jerome K. Jerome

“Domus inferna Sancti Guthlaci: A Rediscovery of the Twelfth-Century Narrative of The Saint and the Money Pit”: my Pseudo-Society talk that sprang from rearranging the Harley Roll illustrations of the life of the saint so they became a sort of DIY disaster

…and of course there’s a whole random Fall song + whatever random obsession has fired in my brain this week which covers most of my crime writing that isn’t currently inspired by Robyn Hitchcock.

It’s not just me, right?