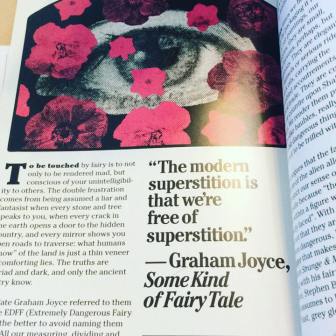 Issue #2 of Hellebore is out in the wilds. Get your copy here (and order the first issue, too). Jam-packed full of magic and lore. My piece is on fairies as ‘the wild gods of the land’ — of course I namecheck Susanna Clarke’s Jonathan Strange & Mr Norrell and Graham Joyce’s Some Kind of Fairy Tale. I am in some pretty sweet company. I loved the first issue, but I don’t think it’s just because I’m in it that I think the second issue surpasses it in beauty. The bold colour scheme looks even more lush than it does in the pictures.

The notion of paganism as a wild and primitive force has exerted a huge influence on folk horror. In fiction, pagan rituals are often seen as primitive and barbarous, but also as an antidote to repression and conventionalism. What have these Wild Gods represented, and what do they represent now? How did these ideas find their way into modern Britain? From the cult of Pan in Edwardian England to 1970s Satanists, from Bacchanals in Buckinghamshire to the echo of voodoo drums in Cornwall, from ritual madness to sex magick. Amidst the idyllic English countryside, the Wild Gods awaken to threaten everything that is respectable.